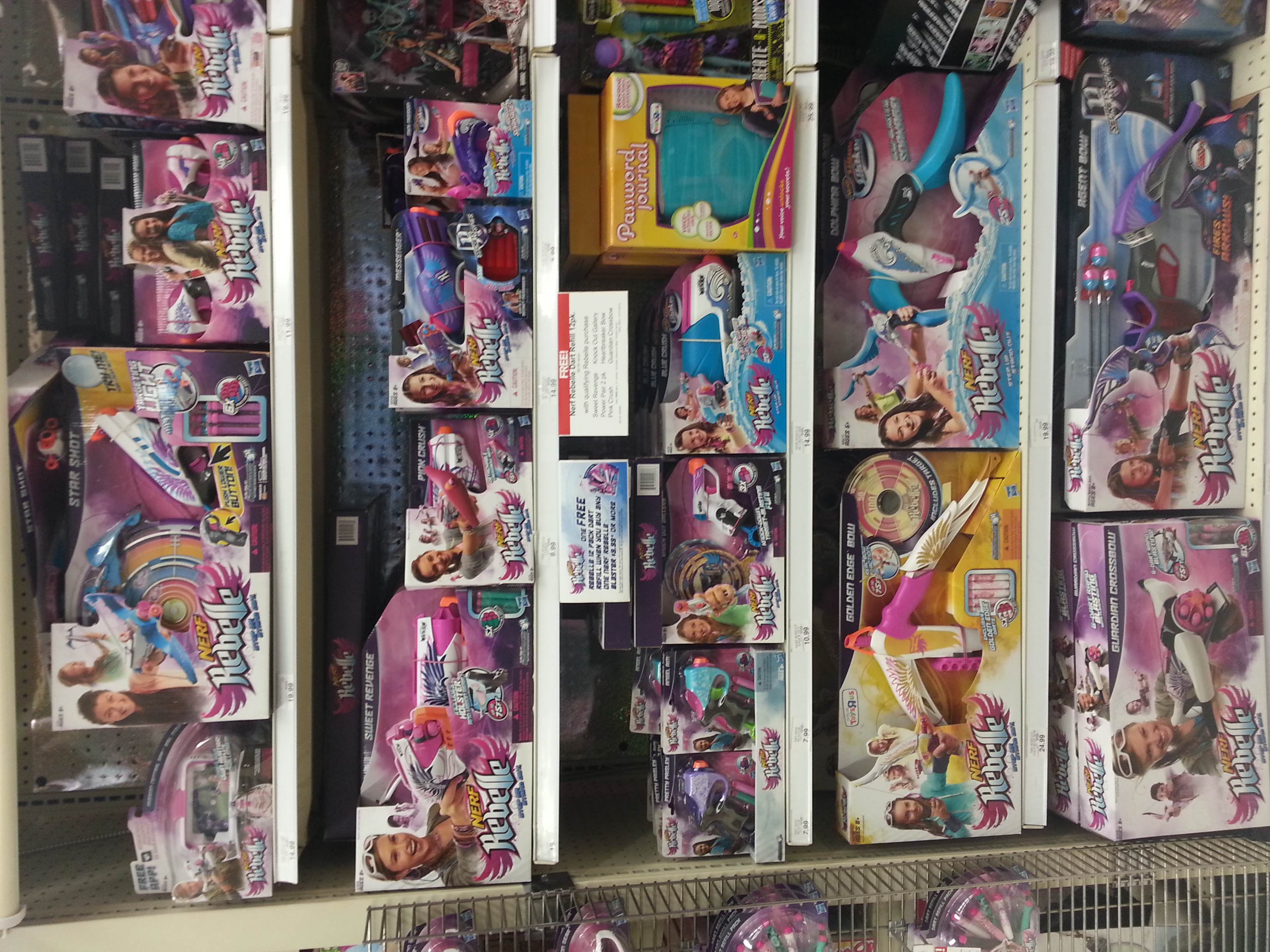 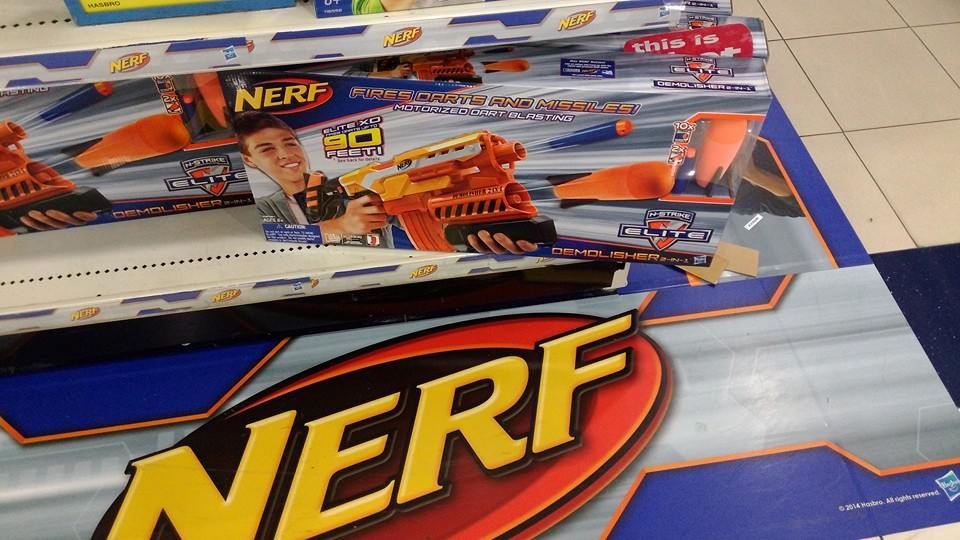 For Reddit. Playing around with some new blaster parts before the real things hit the store… I tried to keep these to scale for size comparison.

Which combination above is your favorite? 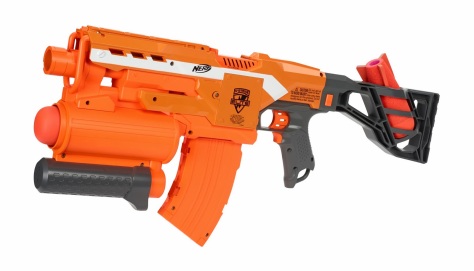 The Elite Demolisher 2-1, Zombie Strike Slingfire, Mega Thunderbow, and Rebelle Agent Bow all get official prices and targeted release month for Australia. I know a good amount of my readers and Nerf fans in general are there, so I figured I would share the information with you. Info thanks to Prop Weapon Scoop.

END_OF_DOCUMENT_TOKEN_TO_BE_REPLACED

UK Nerf recently visited the Nerf section of the UK Toy Fair, and managed to share his findings on the upcoming Fall 2013 blasters. I recommend you check out his entire post to catch all the points, but I’ve highlighted the some things from it below. PLEASE KEEP IN MIND THAT ALL THESE BLASTERS ARE PROTOTYPES, AND MAY CHANGE IN THE FUTURE.

– About the same size as a Rapidstrike, but a little more chunky and front heavier due to the missile launcher attachment.
– Prototype was designed to be semi-auto, but the plan is to make it full automatic after the success of the Rapidstrike. This would probably require an upgrade over the AA batteries it takes to something like C batteries like the Rapidstrike.
– 100 Feet (85 in the UK) is confirmed. This also might be the new range standard for the Elite line.

– Missile Launcher is not de-tachable, at least not without a lot of work/modding.
– The missile is launched with air, but there is no pump or trigger. Slide the grip forward to prime and pull it back to fire
– UK Nerf says missile packs a punch, and could easily see it getting 50 feet or more.
– “The missile itself is a lot smaller than that of a Blast Bazooka, but made of solid foam unlike the missile from the Titan. The fins are angled in such a way that the projectile spins as it flies, thus achieving a more stable flight. This in turn makes the missile extremely accurate.”

– Stock is pretty much modified version of the Supersoaker Lightning Storm.
– Missle is held a bit loosely in the stock.
– Holder gets a bit in the way when looking down sights.

– The Bananna clip holds 10 Elite Darts. But the curved section is dead space.

– About same size and weight as the Zombiestrike Sledgefire.
– Was designed to be used one handed, so it CAN be flicked to prime with.
– UK Nerf says lever was robust, but he can see it failing at some point.
– Barrel is stubby, “but it can be fixed”.
– “Sadly, it appears that the Sledgefire uses a rack and pinion gear system for the priming mechanism, similar to the Roughcut. This means it could be tricky adding larger springs.” 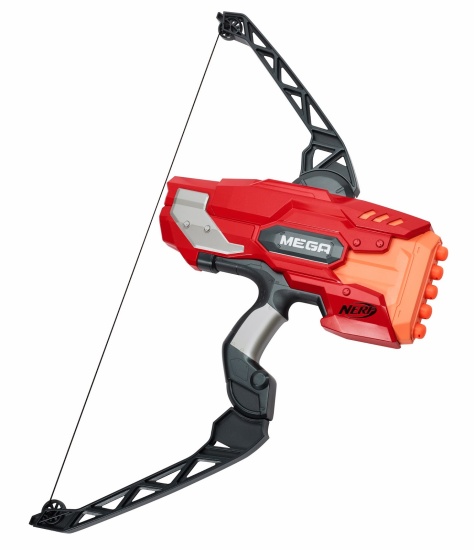 – Not as big as he thought it was.
– Maybe 3 feet long and surprisingly light.
– “Pretty comfortable to carry but a bit too bulky to be considered ‘wieldy’.”
– “I can confirm that it is not a true bow and that pulling on the string articulates the top arm and primes the blaster. Release the string and the arm springs forwards, firing a dart.”
– “There is no ‘catching’ action either so this suffers the same problem as the Rebelle Heartbreaker Bow. If you don’t pull all the way back your shot will barely clear the barrel.”

– Approximately 3 feet long
– “This isn’t strictly a conventional bow because there is no energy stored in the arms. The energy comes solely from the string which is made from some kind of silicone. ”
– “The arrows are about a foot long with a foam ball for a tip and a thin semi-rigid shaft.”
– “Naturally fairly accurate.”
– The bow features an inbuilt reflex red sight.

I’m just going to quote the paragraph UK Nerf typed up for the “secret blaster”.

“Out of everything on the Hasbro stand, there was one blaster we were not allowed to see. We can speculate from the size and position of the empty stand that it is Elite and it’s fairly big. Beyond that I have no details on it. Nothing. Our man from Hasbro was under strict orders to be smug about it’s secrecy which he did very well. We can only assume that it will be unveiled at the New York Toy Fair so we all look to our American cousins for details on that. In the mean time, fire up that rumor mill!”

Photos and news thanks to UK Nerf.

First off, apologies on the first post I made on this. The ORIGINAL SOURCE is Popular Mechanics.

Popular Mechanics also mentions that Nerf will be selling separate accessories. From the source link.

“Nerf fanatics who love customization shall not be disappointed. The butt can be swapped out for other accessories. Nerf will sell laser sights for the foam sniper in you.”

And finally, we have the official product description, USA pricing, and targeted release frame for the USA below.

Photo thanks to Popular Mechanics

Take NERF shots to the next level with the 2-IN-1 blaster that dominates both MEGA and ELITE missions! The DEMOLISHER 2-IN-1 blaster is impressive in size and power firing up to 100 feet, featuring semi-motorized blasting, a 10 dart banana clip, and all new missiles. Connect NERF scopes and lights to the blaster’s top Tactical Rail System and set sights on some of coolest NERF shots performed. Blaster includes two missiles and 10 N-STRIKE ELITE darts. Four AA batteries required, not included. Available at most major retailers nationwide and HasbroToyshop.com.