Product shot of the upcoming “Swift Justice”, from the Doomlands 2169 Line”

Thanks to my contacts at Hasbro/Nerf for the news and image shots. I’m being told that these new Foam Melee items will be available to be viewed at San Diego Comic Con this year! They are made by Perpetual Play Group, which has made solid Nerf items and accessories the in not so distant past for Nerf. The “Swift Justice”, pictured above, closely resembles a knife. While the “Vigilance” below looks similar to an axe.

No information on pricing or targeted release frame yet, but keep your eyes and ears open to my site for that info in the future! 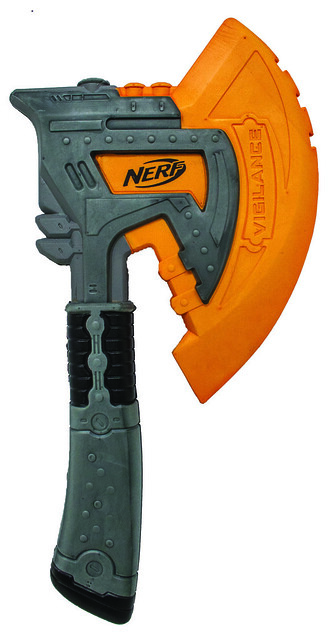 Product shot of the upcoming “Vigilance”, from the Doomlands 2169 Line”

Check the rest of the post for two more looks at the Swift Justive and Vigilance.
END_OF_DOCUMENT_TOKEN_TO_BE_REPLACED

Just yesterday, a Youtube user by the name of “Charles Tietjen” posted the video above to Youtube. He attaches Nerf suction darts to his eyes and looks around, which looks a bit odd to say the least.

WARNING: This is a bit unsettling, and it personally made me squirm while watching it. Just knowing that Nerf suction darts would be attached to your eyes gets me closing them.

In a different video linked below, he says in the description that he has contacts over his eyes. Even so, I WOULD NOT RECOMMEND doing this this, at all. Always wear eye protection when playing with Nerf blasters folks.

There’s a less another video he made showing the process of putting them on, which is also a bit easier to take. If you want to see more, someone also made a short gif as well. Check the rest of the post to see that.

END_OF_DOCUMENT_TOKEN_TO_BE_REPLACED

Keri Russell tells Jimmy about her son’s annual Christmas list and how vicious her toddler daughter gets during Nerf fights.

American actress was on the Tonight Show with Jimmy Fallon, and during their talks about Christmas wishlists she reveal that her young children (3 & 7) are into having Nerf wars with their parents. Of course, it’s not quite as crazy or hardcore as more of us Nerfers, but it could be a start! And of course, it’s nice to hear Nerf getting some attention in the mainstream media.

So if you remember my post about the N-Strike Elite XD line bringing new standards to Nerf’s Elite ranges, you would have probably been excited about it like most fans. It seems like 75 feet to 90 (angled, stock measurements of course) would be very noticeable.

However, fan Mod blog “Derp Mods” has done some range tests with an Elite XD Triad, and the results are disappointing, and also a bit confusing. Check the rest of the post for more info and a possible explanation.

END_OF_DOCUMENT_TOKEN_TO_BE_REPLACED

In a recent press release from Blastersmiths UK, they’ve announced that they’ll be teaming up with BlasterTECH in Australia to help distribute the Blastersmiths UK products and items easier and quicker to Australian, Asian, and Pacific Nerfers! Blastersmiths UK is known for their popular items such as the MKIV Drop Leg Holster and their Custom Fabric Nerf Mag Holders.

Check the press release below for more in-depth info. You can expect to start ordering from BlasterTECH November 1st.

Blastersmiths UK and BlasterTECH today announced a working partnership that they hope
will be benecial to both companies. BlasterTECH is an emergent wiring loom and electrical
modication company based in Brisbane, Australia. They have recently started selling wiring
looms through their website, BlasterTECH.com.au with the aim of lowering the threshold to
entry for the average Nerf modder. Blastersmiths UK already sells an array of un-soldered kits
and 3D printed parts so a trading partnership seemed like the natural step forward for the two
companies.

The two companies first encountered one another through BritNerf.co.uk, the UK’s primary
Nerf forum. Mike, from Blastersmiths UK, and Dean, from BlasterTECH, got chatting around
electrical modication and the potential of selling modied blasters. Regrettably, the regulatory
environments in both the EU and Australia prevent the sale of fully modied blasters on their
own at the commercial level but kits and pre-soldered looms can be sold in the EU and Australia
respectively. BlasterTECH moved forwards with their wiring looms and accepted the oer of
distributor in order to resell 3D printed components and some tactical gear in order to fund
future development.

Australian customers can purchase BlasterTECH wiring looms direct from their website
(www.blastertech.com.au) with immediate effect and from the 1st November 2014 will be able
to access a wider array of Blastersmiths UK products without the risks of international shipping
or the wait that comes with lead times for custom made goods. All Blastersmiths UK products
listed on BlasterTECH.com.au will be available in stock for immediate dispatch in accordance
with BlasterTECH shipping policies.

Looking to the future, the two companies are looking to work closely on further developing kits
and looms for the full range of electronic foam dart blasters, including Nerf’s Elite Demolisher
2-in-1. There is a great deal of untapped potential in the many electronic blasters out there
and the two companies are looking forward to tapping that and bringing new products to the
foam dart blaster marketplace.

A product shot of the Mega Bigshock

If you the leaked images of the probable upcoming 2015 Nerf lines, then you’ll remember the Mega Bigshock and Elite Slingshock being listed on there as well. And now, thanks to the German site Bankcroft.de, we now have a new high quality images and product descriptions of those two upcoming blasters. No release dates or targeted release time frames yet, but stay tuned to Basic Nerf for more info on that as they come out.

Check below for the product descriptions and images of the Mega Bigshock, and Elite Slingshock.
END_OF_DOCUMENT_TOKEN_TO_BE_REPLACED

Error: Twitter did not respond. Please wait a few minutes and refresh this page.